Hacknight by hasgeek, at Pune

July 16, 2012
This was my first ever experience of the hacknight! It was indeed a memorable night, and a note of thanks to @hasgeek team for an amazing well organized event, having good food, beverages and shelter! ...little goofing up of address venue direction is forgiven!! I must thank Mahesh as well for pushing a family guy to geek's hacknight. :)

I reached there around 13:45 hours, and following true Indian Standard Time I made it 15 minutes earlier. A few hackers had already arrived and some had already started hacking the ideas! I got my self registered, pay'd the registration and fees. And then we started socializing around. During discussion, I was planning to join the group of Navin or Piyush but later found that both of them came just to kick start the event. But then during the night, got another two...Samyak and Kaustubh.

Nikhil had a great idea around travel locator based on neo4j and jaideep, a web hacker has idea on visualization using d3. I teamed up with krishna, a php geek, and tried to build analytical tool for pages from facebook. First time dived deep and understood facebook API. Overall it was a great learning getting familiar with neo4j, d3, facebook, hadoop, etc. More important, what is a geek!

Though the final analytic tool still remain a dream, it was a cool experience.
As krishna wanted to catch Sinhgad exp. @ 6:00am and even I was about to crash by that time, I left the group @5:40am without cool hacknight Tshirt... [Thanks Zainab for handing over Tee to my peer at B'lore event!]

Jaideep captured these moments in his high tech SLR. Here are few clippings/clicks - 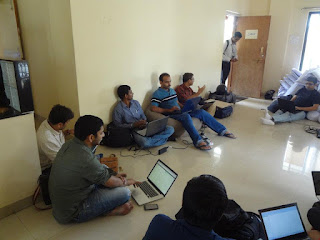 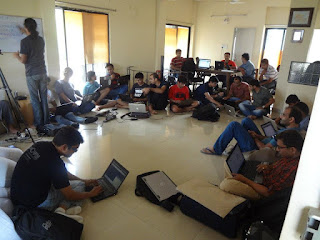 February 09, 2015
I came across a book Mastering Hadoop published by Packt and authored by Sandeep Karath. Here is my detail review about the book- SUMMARY This book is based on most popular massive parallel programming (MPP) framework " Hadoop " and its eco-system. This is an intermediate level book where author goes in depth on not only the principle subject but also on most of the supporting eco-systems like hive, pig, stream, etc. The book has 374 pages with 12 chapters, the ToC  itself is spanned across 7 pages! It has conceptual as well as hands on lab experiences with lot of code churned into. OPINION The book starts with genealogy of Hadoop where the author has nicely narrated the evolution of web search to current state and then various releases of Hadoop. Good reasoning as why Hadoop 2.0 was essential to move ahead from previous version. Touches the architecture starting from high level 3-layered, drilling down step by step to cluster and node level. Describes all the feat
210 comments
Read more

August 23, 2013
When it comes to Hadoop, still some people believe it as a single out of box system catering all big data problems. Unless you are thinking of some third party commercial distribution, this is not correct. In reality, Hadoop on its own is just HDFS and MapReduce . But if you want production ready Hadoop system, then you will have to also consider Hadoop friends (or components) which makes it a complete big data solution.  Most of the components are coming as apache projects but few of them are non-apache open source or even commercial in some cases. This eco system is continuously evolving with large number of open source contributors. As shown in the above diagram. The following diagram gives high level overview of hadoop ecosystem. Figure 1: Hadoop Ecosystem The Hadoop ecosystem is logically divided into five layers which are self-explanatory. Some of the ecosystem components are explained below: Data Storage is where the raw data will be residing at. There are mul
106 comments
Read more

Is blockchain a technology or an algorithm?

January 18, 2018
After a phenomenal growth of bitcoin in 2017, all of sudden everyone in the cyber world has started talking about crypto-currency and the technology behind it - Blockchain . I am sure you too must be flowing through this new fanfare. So here I would be trying to explain this platform in just 11 mins . What is Blockchain? Blockchain is an ever-growing list of transactions , called Blocks which are always linked to their previous Blocks and are secured by cryptography hash. This Blockchain will be stored on distributed peer-to-peer (P2P) network nodes. If you are familiar with BitTorrent, you can easily understand this P2P communication. Each block has three things: data, its own hash and hash to previous block Data can be regarded as a ledger. Hash can be compared with fingerprint, which is a unique identification of the block. It is generated based on the content and even a single character change will make it different. Hash to previous Block: this creates a link
89 comments
Read more